SWISS First Class: What It’s Like To Have The Entire Cabin To Myself…. Lighting has struck twice in my travel ‘career’.

The particular flight was aboard SWISS LX6 from Zurich To Chicago.   My wife and I were homebound to GRR after spending 10 days in Africa on a Safari trip.  You may ask why would I sit in First and not my wife but the answer is simple:   She had sat in Lufthansa First for the flights to Frankfurt and then on to Johannesburg and she insisted that I take the final leg home in First.

Our tickets for the trip were a combination of paid fares, some miles, and a couple of Miles & More eVouchers.  Once all of that was mixed together, my wife enjoyed the trip from Chicago to Johannesburg in Lufthansa First while I ‘sucked it up’ in Business Class for the flights.  On the return, we both flew SWISS business from Jo’burg and then my wife made the sacrifice to sit in Business while I took in the LX First Class experience from Zurich to Chicago.

I became cautiously optimistic about being the only passenger in First when I checked in for our flights a day earlier and saw that the cabin was empty.   I assumed there would be at least some last minute upgrades by passengers but that never came to pass.    When we boarded, my suspicions were confirmed when I was greeted by the Flight Manager who told me I was the only passenger in the cabin for the flight and thanked me for being a Miles & More ‘Senator’.

Knowing that I had a SWISS A330 (HB-JHE / delivered Jan 29, 2010) to serve practically as my private jet for the 9.5 hour flight, I imagined things would go well.   I underestimated!

The 2 flight attendants working in the F cabin were wonderful and saw that I thoroughly enjoyed the ride home.   After the initial formalities where they referred to me as Mr. and sir, I asked that the drop the fancy-speak and just treat me as if I were a friend or family member aboard the flight.  I know they have to follow a certain standard of service, but I don’t deserve or enjoy being treated with the ‘formal’ approach.     I’ll leave that to the maximizers who enjoy squeezing out everything they feel they are entitled to, including being talked to like royalty 😉 …but wait, Maximizers can’t find their way easily into a SWISS First cabin, but I digress.

After I had settled in, the pilot came to introduce himself and thanked me for being a SWISS customer.  He spent a few minutes talking about the flight time, routing, and anticipated trouble spots for turbulence.    It’s always interesting to receive a personal briefing from the person in charge of bringing you safely to your destination.   I asked if we can fly via HKG as a technical stop, but we didn’t have enough relief pilots on board.

With all the verbiage aside, here are the photos from the flight.  First will be the hard product and then the meals.  I suspect the photos will replace the need for words. 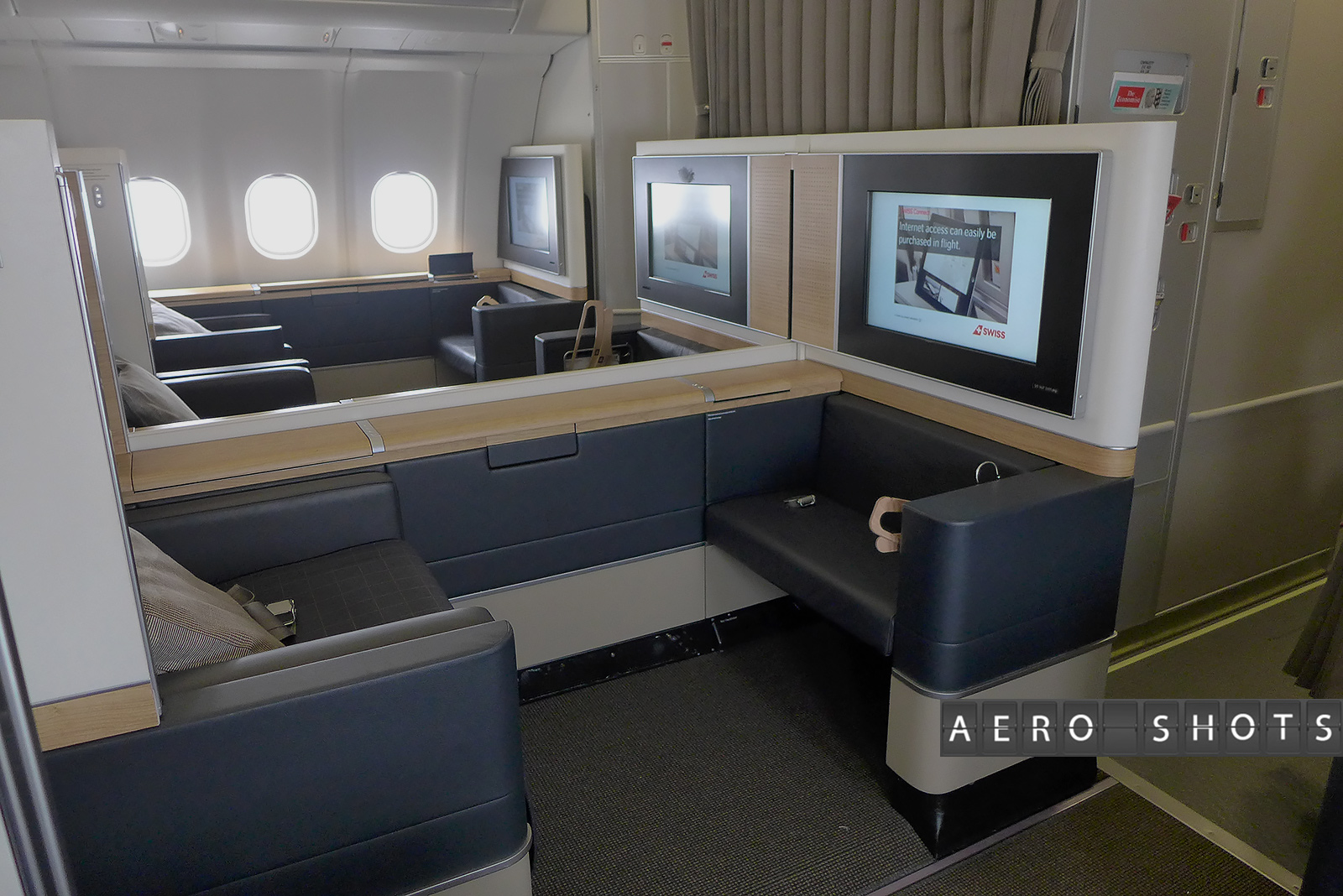 View from seated position. The Ottoman moves out via electric motor which allows for a guest to sit across from you. Another look at 1K…. Seat control pad and remote control for the IFE system.  USB power as well as the headphone jack is installed in this compartment.   The IFE System was excellent. Over 80 movies and dozens of TV shows ensure there’s something for everyone on board.    WiFi will be introduced aboard the A330s beginning in January 2017.  I only watched one movie since I was busy sorting through nearly 13,000 photos that came back with me from Safari. Storage for the large table. It’s a nice size especially when a guest sits in the Ottoman. The small panel in front of the tray table storage area contains the 110/220v power outlet. A dedicated control pad for your seat provides you with complete control. The remote control allows you to adjust every angle of the seat, as well as lighting settings and seat cushion adjustment. The SWISS First Class and Business Class seats have adjustable air-filled cushions for complete control of your seat’s comfort. The larger IFE screen is found on SWISS’ newer A330 aircraft….. The Amenity Kit was full of useful items.   Separate kits are available for male and female passengers.   Pajamas are also provided and are made from a high quality cotton blend similar to high quality T-shirts.

The food aboard the flight was just as excellent as the hard product.   The multi-course experience featured some outstanding options and were healthy sized portions.    So well sized that I had to take a break between the Salad and Main Course to recover from a bit of a food coma. The pre-departure snack consisted of a fresh fruit cup and almond pastry. The Balik Salmon appetizer is a signature dish in the SWISS First Class cabin. This style of Salmon traces its roots to the Tsars of Russia and today the recipe is trusted to only a handful of individuals. Phenomenal!

Click here to learn more about the history of Balik Salmon. Another excellent appetizer. A combination of cold cuts from some of Switzerland’s finest butchers….. The beet and greens salad is delicious. Complimented perfectly by a Balsamic dressing. The main course of Veal Filet literally melted in your mouth. There was no need to use a knife. Cooked and seasoned to perfection, and a nice sized portion.

I forgot to take a photo of dessert, but it was a choice of Mövenpick ice cream served either in a waffle cone or in a bowl.   Other desert choices included fresh tarts,  fruits, and cheeses. Approximately 90 minutes before landing, a light lunch was served. The grilled chicken club sandwich was excellent.

Now that you’ve had a glimpse at life aboard SWISS’ First Class cabin, take a look closer look at SWISS’ beautiful new First Class lounge that opened earlier this year in Zurich.